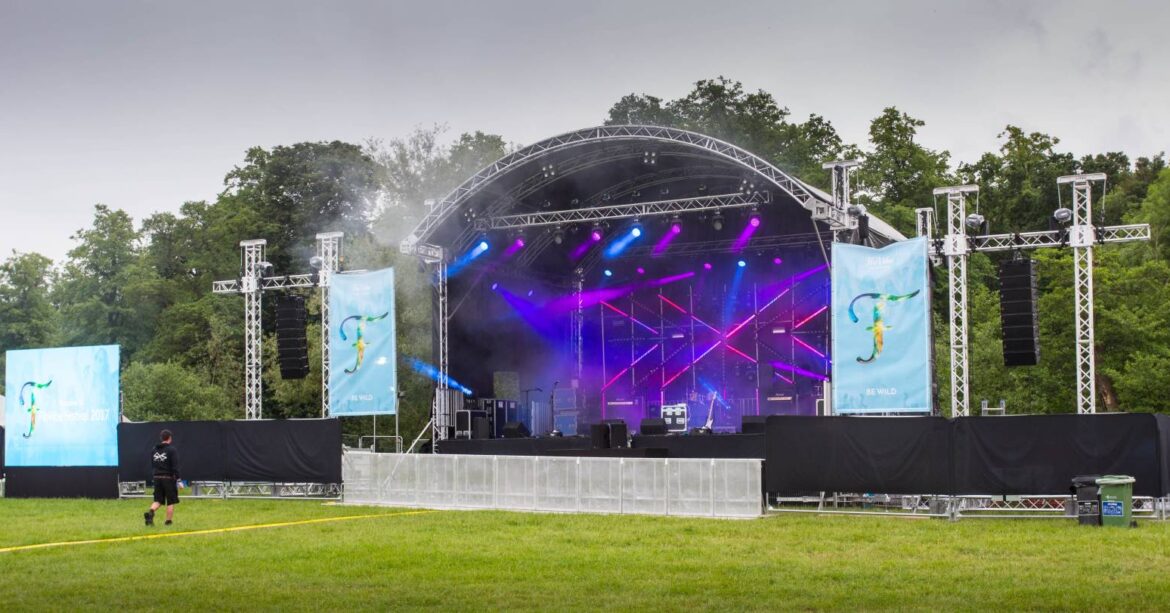 This article will give clients and event managers a basic headline understanding of power distribution at events. This article should help the reader to develop some understanding of the key issues as well as some common mistakes. This is designed to give a basic overview, if you are interested in more detail, there are many resources or courses available.

Mains Power
‘Mains’ refers to power from ‘the grid’. The grid is the national power network of power lines, substations, transformers etc. This is where the electricity comes from which delivers power to people’s homes. For events we always aim to use mains power where possible. The reason for this is that it is reliable in the UK (not always the case in other parts of the world), readily available and has a very low cost compared to generators.

Many event locations have ample power coming into a building, but a common issue is that there is not an appropriate method of attachment to the existing system. A building can have lots of power available but it may not be installed in a way where we can access it. In these cases it is often possible to negotiate for a dedicated power socket to be installed. Having a socket installed requires various considerations, such as distance from the power distribution board, gaining approval from landlords, agreeing on who is covering the cost and sometimes even permission for use in listed buildings (in the UK).

Wall Sockets
The standard wall sockets you are used to seeing do not deliver large amounts of power (UK sockets allow a draw of 13amps – enough to power 3x typical theatre lights). A large number of sockets does not necessarily mean that there is a lot of power available – a lot of these sockets share a circuit and therefore are still limited in terms of how much can be plugged in. For all but the smallest of productions, you are likely to require the use of a ‘cee-form’ socket somewhere which can have production equipment plugged into it.

Generators
Generators are machines which produce electricity on their own without the need for attachment to the main grid. In most cases generators are a diesel engine attached to a dynamo or ‘alternator’. An alternator is the device your car uses to charge its battery from the engine. Alternators in generators are much larger. The basic engineering principles behind generators are simple and long-established but many generators have sophisticated control and synchronisation systems.

As generators are powered by a diesel engine, they are generally reliable. However, it is always sensible to have a backup in case of failure. Uninterrupted and reliable power is essential for events and a generator breakdown, although unlikely, can mean failure of critical event equipment.

There are several ways of having a backup system. The most effective and reliable is using two generators in synchronisation. This means that both generators work together to create electricity. If one set fails the power continues without any gap in the continuity of the event. This is the ideal solution but requires the use of modern generators with a skilled operator.

The second option is using an ‘AMF’ or switch-over panel. These systems detect when one generator has failed, starts the other, and switches the power over. These are ideal for building sites or other locations where consistent power is not vital. For events these are in not ideal as it is essential that technical equipment is checked over by a skilled technician before being turned on again. Some equipment needs to be turned on in the correct sequence to avoid any problems.

The third option is a manual change-over. This simply means having one generator working and another sitting next to it, but not connected. With this arrangement a technician needs to manually move all attachments from one generator to the other. If done properly this is a safe and thorough system, but can result in downtime of anywhere from 1-15 minutes depending on the size of event.

As with all production design, it is necessary to choose an appropriate solution based on all factors such as budget, time, space, available resources, the nature of the event and the importance of each aspect of the event.

Battery/Solar
PYTCH have designed and produced our own range of products called ‘SolCell’ which harness solar power to charge batteries and produce power on sites where mains power is not available and diesel generators are not practical or desirable. This is especially relevant in the current social climate, where the harmful effects of diesel are a strong conversation topic. You can visit http://solcell.net to learn more about this range of technologies.

How much power?
The answer to this question is determined by the specific needs of an event. It is possible to calculate the power requirements of your event yourself, however we would always recommend speaking to an experienced contractor to determine whether you have an appropriate solution. Power is complex and mistakes can be costly both financially and to personal safety.

Water, Weather, and IP rating
Needless to say, water and electricity don’t make good bedfellows. For all outdoor or covered events in the UK special consideration must be given to water and the risks it poses. It should be assumed that a torrential downpour is possible at any time of year. This assumption means that all equipment specified should be suitably protected in order to safely continue to function in the event of rain.

Equipment that is used outdoors and is otherwise unprotected from the elements should have an appropriate IP rating. IP ratings relate to how well electrical equipment can withstand dust and water. Usually a piece of electrical equipment will be stamped with an IP rating if it has one, or the rating can be found in the documentation. It takes the format of ‘IPXX’ where ‘XX’ is a two digit number. The first digit is how well protected the equipment is from solids e.g. dust on a scale of 1-6, and the second is how well it is protected from liquids on a scale of 1-9.

To understand what phases are and how they work you need to have an in depth knowledge of electrical theory. For the purpose of general understanding it is important to know that single phase power is one lot of power, whereas three phase works practically as if it were three lots of power from one socket.

So a 63 amp single phase supply can only provide 63 amps. A 63 amp three phase supply can provide up to 189 amps of power. The size of cable and connectors between both these supplies is similar. Three phase is preferred by event production and power companies as it is a more efficient way of distributing power.

Generally speaking event power is provided on connectors which are known as ‘cee-form’, or ‘commando sockets’. These connectors come in ratings of 16amp, 32amp, 63amp and 125 amp. Single phase connectors are blue and three phase connectors are red. If a power supply is defined by a current rating that is not one of these numbers then it is worth further investigation.

For power supplies above 125 amps there are other high-voltage systems, such as ‘Powerlok’. This type of equipment is very specialist and only needed on projects where very large quantities of power are needed.

‘Breakers’ can refer to many types of circuit protection device. Broadly speaking, they work in the same way as a fuse insofar as that if current beyond their rated amount is drawn they will ‘trip’. This causes the power to that supply to cut out immediately to avoid any electrocution or fire.

Breakers can be tripped because of over-loading, but also because of a ‘short’ in a system, including light bulbs blowing. Breakers tripping is not uncommon and in a well-designed power distribution system should not cause major issues.

It is good practice to design your power system so that high power draw applications such as catering and technical production are isolated from one another, as you don’t want the caterer’s extra kettle to cause all of your lighting to go out!

An RCD is probably the single most important safety device in an electrical system. RCD stands for Residual Current Device and will ‘trip’ in the same way as a breaker when triggered. RCDs work by detecting when current is ‘leaking’ out of a system. This situation can occur when there has been a fault and current is feeding to ground (or into a person).

RCDs come in different sensitivities (30mA, 100mA and 300mA for most applications) and this sensitivity relates to how much current has to be disappearing before they trip. In the UK any power supply that is feeding appliances in contact with people should have a 30mA RCD on it. This means that if more than 30mA is going astray the power trips.

RCDs and breakers are often combined into the same unit.

Earthing is another very important safety function within power distribution.

An ‘earth’ is essentially an additional wiring system that runs throughout a power system that ultimately connects into the ground via long copper rod, underground grid or similar.

The idea behind an earth is that if there is a power fault the current will be directed into the ground rather than into people. In such a case an RCD or breaker should trip, indicating to the user that a problem needs investigating.

Often the cable route from appliance to ground can be very long and contains a great deal of ‘resistance’. For this reason installers will often need to conduct tests to ensure that the route to ground is good.

A competent power contractor will provide an installation sign off upon completion of their work. This is an important process for complex systems and acquiring this documentation can be vital for an Event Manager.

PAT stands for Portable Appliance Testing. This is an annual test procedure that should be carried out on all equipment that distributes or uses electricity.

Whilst not a legal requirement in the UK, it is generally accepted that PAT testing is the best way of fulfilling your legal obligation that all equipment used on your event is safe. You can request from any supplier of electrical equipment that they supply proof of their electrical testing.

Safe management of equipment requires annual testing, visual inspection at every use and, most of all, experienced staff and an open culture with a focus on safety.

Below are basic, non-technical explanations of the three main interconnected elements of electricity.

Power – The relationship between volts and amps. This is how much actual energy is being used. Power is measured in watts, kilowatts and is sometimes expressed in kVA (e.g. in the case of generators). Power is determined by what is plugged into a system. Sometimes a supply may refer to watts; in which case the provider is suggesting what the maximum is that can be taken from the supply. A kettle may use 2000 watts, a TV 100 watts, a desk lamp 20watts, a powerful theatre light 2000 watts or a large followspot 7000 watts.
Volts – Volts are what come out of a socket. What is plugged into the socket does not have an impact on voltage. The volts are forced through an appliance. Sometimes voltage does reduce or ‘drop’ (usually due to long cable runs) which can have a range of implications.
Amps – Amps are a measure of current and mostly relevant to equipment used for power. Cable and connectors are generally defined by how much current they can safely handle. People often define electrical systems in amps or watts, as they are both interdependent.

If volts drop, amps go up. It is important to allow excess capacity in equipment to withstand an increase in amps (current).

PYTCH can provide advice on and installation of all sizes and manner of power distribution system. Please get in touch to discuss further. 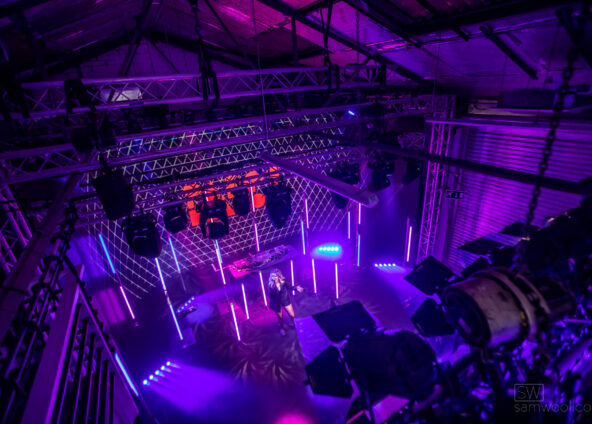 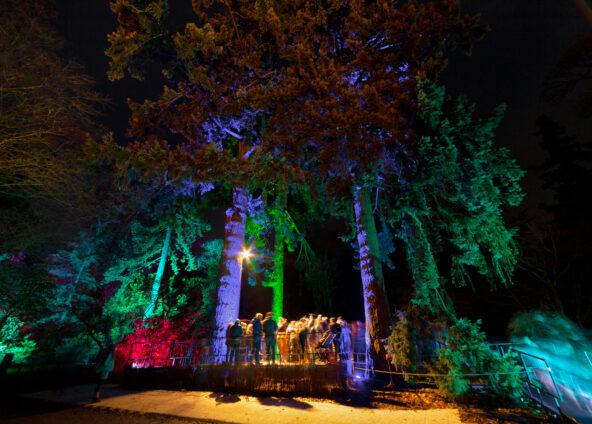 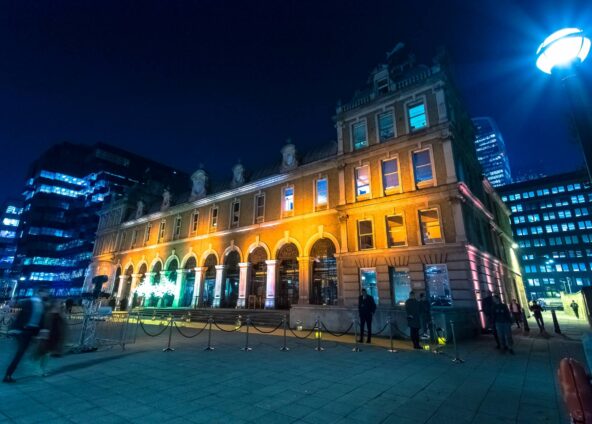